Join us for our first ever banquet!

All proceeds go to the SC Autism Society to help support Autistic persons and their families in times of need. It will be a fun night of good food and friendly faces. Saturday April 27, 2019 from 6:00 pm to 9:00 pm.  Order your tickets today!

Donors and Sponsor for the First Annual Autism Awareness Banquet 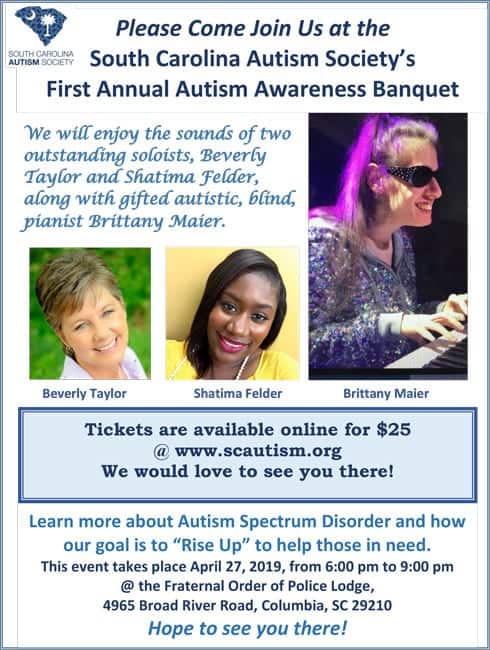 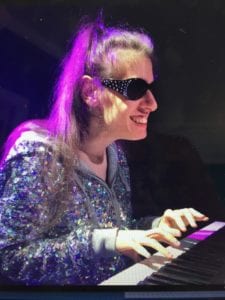 Brittany Maier was born in April of 1989. Premature by four months, she weighed a pound and five ounces. Even though she was diagnosed blind, autistic, and mentally disabled, Brittany Maier’s amazing musical talent surfaced when she began playing Schubert’s Ave Maria on a toy piano at age six. Able to duplicate a song after having just heard it a few times, Brittany Maier memorized music with no limit to style, instrument, or language it was recorded in. At age ten, after receiving formal music instruction at The University of South Carolina’s School of Music, Brittany began composing her own original songs and she released her first album “20/20” when she was just twelve years old

Brittany Maier’s second CD, titled “A World of My Own,” was released through Barnes & Noble stores nationwide in America in 2006. In 2007 her music grew to a worldwide audience when she appeared on German television for Die Show Der Merkwurdigkeiten (“Show of Miracles”). Headlines from newspapers called her “A Gift from God” and “A Musical Miracle” and those thoughts are echoed daily by her fans.

"The Golden Gourd" Pumpkin DerbyThis event benefits the SC Autism Society... Gather your "Pit Crew" and watch as the excitement build as each and every racer competes for the coveted "Golden Gourd" Championship Trophy and Cash Prize. All ages and abilities are invited...
Read More

Exciting News! BiLo Giving Tag Program HOW IT WORKSUpon purchasing the Community Bag with the Giving Tag at any BI-LO, Fresco y Más, Harveys or Winn-Dixie, shoppers aredirected to:1. Visit MySEGCause.com within 7 days of your purchase.2. Remove the...
Read More

A Delicious Way to Raise Money!  Join us for two days of great food for a cause as we partner with Fatz Cafe. Starting Monday July 15th through Tuesday July 16th at the Fatz Cafe of Aiken, Anderson, Boiling Springs, Camden, Cheraw, Rock Hill, Clinton, Easley,...
Read More

A Delicious Way to Raise Money! Join us for four days of great food for a cause as we partner with BJ Brewhouse. Starting Monday May 20th through Thursday May 23rd at the Harbision Blvd location in Columbia SC, BJ Brewhouse will donate 20% of food and soft beverage...
Read More

Schedule Your Midlands Gives Donation Today!Midlands Gives brings the region together as one community, raising money and awareness for Midlands nonprofits during an annual 18-hour online giving challenge. During Midlands Gives, everyone has the opportunity to be a...
Read More